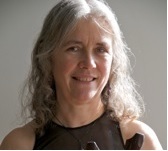 Nancy Daly graduated in Recorder from the Royal College of Music, London in 1973 and since then her teaching career has centred around her desire to see the recorder firmly re-established as a ‘serious’ instrument and to destroy the popular misconception of it as only a children’s classroom instrument.

Over the last 40 years she has tutored individuals, consorts and chamber groups of all ages and abilities, both under her own auspices and at leading colleges, schools and music services in England.

Her interest in the Suzuki approach started as a Suzuki parent, and when the Recorder Suzuki Method was published, she realised that it answered the problems of teaching very young children in a completely original way. She started her Suzuki training with Katherine White in the USA in 2000 and completed it in 2010. She became an Instructor in 2007 and then went on to establish and run the British Suzuki Recorder Teacher Training Course, the first in Europe.